Make sure this account has posts available on instagram.com.

When Jamie’s Italian opened, it was so popular that everyone was lining up for it, and I believe they didn’t take bookings at the time. While I’ve watched a few episodes of various Jamie Oliver shows, I wasn’t too interested in 1. a Jamie Oliver restaurant and 2. an Italian restaurant. I find that Italian is a cuisine I avoid because so many mid-range restaurants do this quite poorly, being mainly pizza and pasta (the exception to this, and my continuous glimmer of hope is a 2004 experience of a restaurant in Crows Nest called Pino’s Pizzeria, where I had the most amazing zuppa di pesce). So when a big name was involved, I didn’t mindgiving it a go.

The waitstaff in here are pretty cool, with crisp white shirts and cute ties. The first thing they did after we placed our order, was to put a couple of tins of canned tomatoes on the tables. I figured they were for something, and the waiter did explain that a few people tried opening them. Their actual purpose was to elevate the antipasto board! We chose a selection of three meats, bocconcini, and what I recall to be some pickled vegetables.

Today’s salad was witlof, radicchio, walnut, watercress, beetroot. This was a very earthy kind of salad lifted by the vinegar dressing. I don’t like walnuts, and have a love/hate relationship with the bitterness of witlof, but I always order it because I’m masochistic like that – I enjoy the concept of eating witlof, but don’t necessarily enjoy the flavour. On a separate visit, there was also an orange and fennel salad special that was tasty too.

I ordered the rabbit special with polenta. It was my first time trying out rabbit, and it was quite tender and flavoursome. I love trying out different food, so I was quite happy with this dish.

Squid ink angel hair pasta with scallops. I believe this was one was spicy, otherwise I would have ordered it for myself. I love the concept of angel hair pasta because of how fine it is, and the squid ink was an extra bonus.

An eton mess! Stacked high! It’s a dish that I like ordering to see how it’s presented – the messier the better! 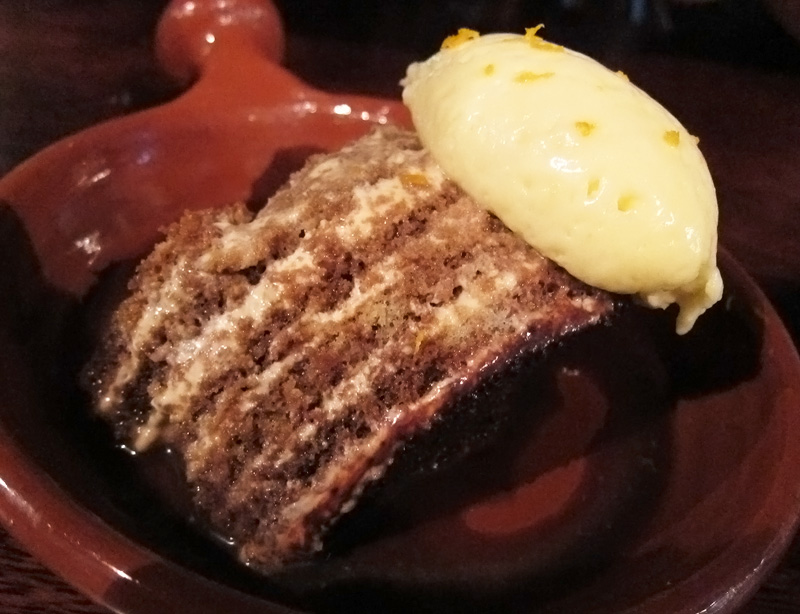 Tiramisu, one of those things you have to order at an Italian restaurant. For me, it was neither here nor there.

Vanilla panna cotta with raspberry coulis. This was the perfect wobbliness! An episode of Masterchef that had aired had Matt Preston testing the wobbliness of panna cotta, and when I shook this one is was about the same. I love panna cottas.

Overall, I find Jamie’s Italian a “safe” restaurant – one where you can’t really go wrong. However, it’s not my type of restaurant, though I’d happily recommend it to friends, as the food is wholesome and tasty. I also don’t intend to visit the rest of the franchise in Perth and Adelaide to compare. However, my visits here do mark all Jamie Oliver restaurants as places you can go in a pinch when you want some good food.